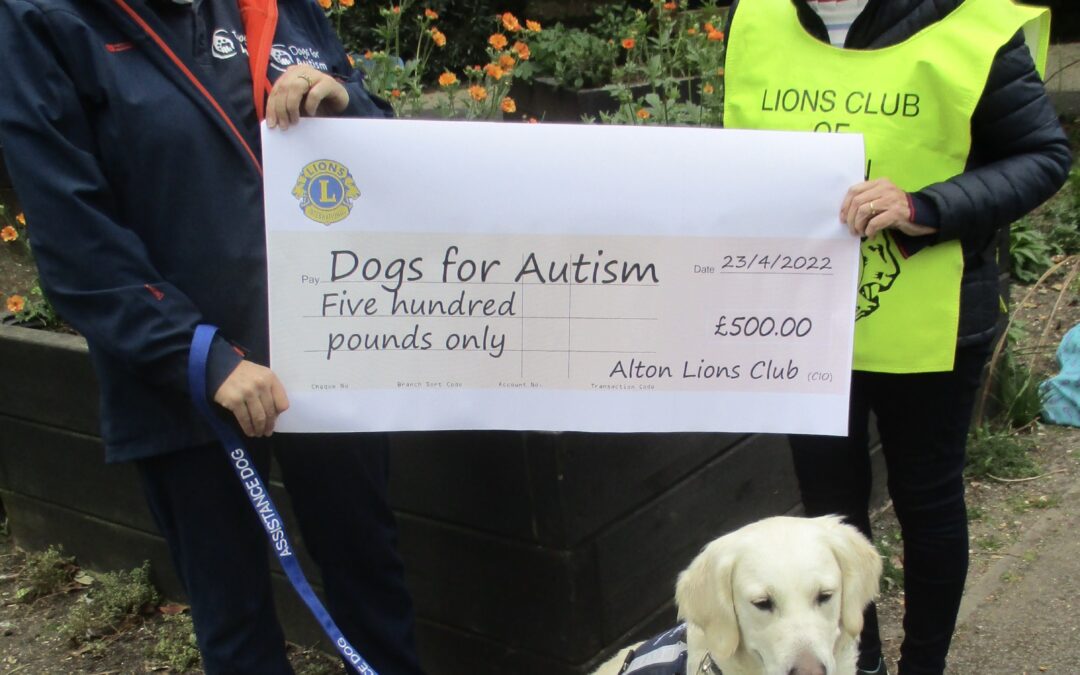 Earlier in April, our CEO Hilary, had the pleasure of opening the recent Lion’s Club Quiz night; a popular event at the Alton British Legion Club, which sees all proceeds donated to local charities. Hilary opened the quiz with an informative talk to the quiz members and introduced the quiz players to one of their beautiful trainee dogs, proudly wearing her Dogs for Autism jacket. On the night the total raised was £500 for the charity which included prizes from a raffle, generously donated by Lion’s members.

Last month Hilary spoke to the Alton Women’s Institute (W.I) and this month in May, Hilary will have the opportunity to share the story behind Dogs for Autism at the next Alton Rotary Club meeting. Planned visits also include the chance for the Crondall First Cubs group to meet some of DfA’s lovely dogs and taking a stall along with more of their fabulous dogs at the Four Marks Jubilee Summer Fete on Sunday 5th June and the Binsted Fete and Dog Show on Saturday 2nd July.

At the Binsted Fete, the Dogs for Autism team will launch a very special fundraising campaign, ‘Walk a Platinum Mile’, a special 1.3-mile family friendly walk to celebrate the Queen’s Platinum Jubilee and raise funds for the charity. Why not bring your four-legged friend and join in the fun? There will be a ‘doggie’ lucky dip and ‘pin the crown’ on the puppy (not a real puppy!), to delight the younger visitors on the day.

Alton Lions Club President, Atul Patel said, “Dogs for Autism is a relatively new local charity which is doing great work in supporting folk with autism – the assistance dogs appear to make such a difference, especially to the lives of young people. We are very lucky to have such an amazing charity operating in Alton and I would like to thank all those folk who came along to the St George’s Day Quiz to support them. Thanks go also to the Royal British Legion Club for hosting the event.”